Choose your region and preferred language

The prognosis for men with aggressive prostate cancer is improved if the disease is detected at an early stage, while it is still potentially curable. Dr Antoinette Perry, a Senior Research Fellow at the Institute of Molecular Medicine of Trinity College (Dublin, Ireland), leads a team of scientists who perform functional and translational research to facilitate early detection of prostate cancer and identify biomarkers that distinguish between low- and high-risk disease. Research in Dr Perry’s lab is directed at understanding how changes in DNA methylation of coding and non-coding RNA genes are involved in driving prostate carcinogenesis.

The scientists exploit specific epigenetic changes for early, noninvasive detection of aggressive prostate cancer. In the process, they hope to develop predictive epigenetic biomarkers—focusing both on circulating free nucleic acids and exosomes—that can be quantified by simple, liquid biopsy. The experimental designs used by the lab to identify epigenetic markers and their effects on gene expression are outlined in Figure 1, and discussed in the methods Definitions box. 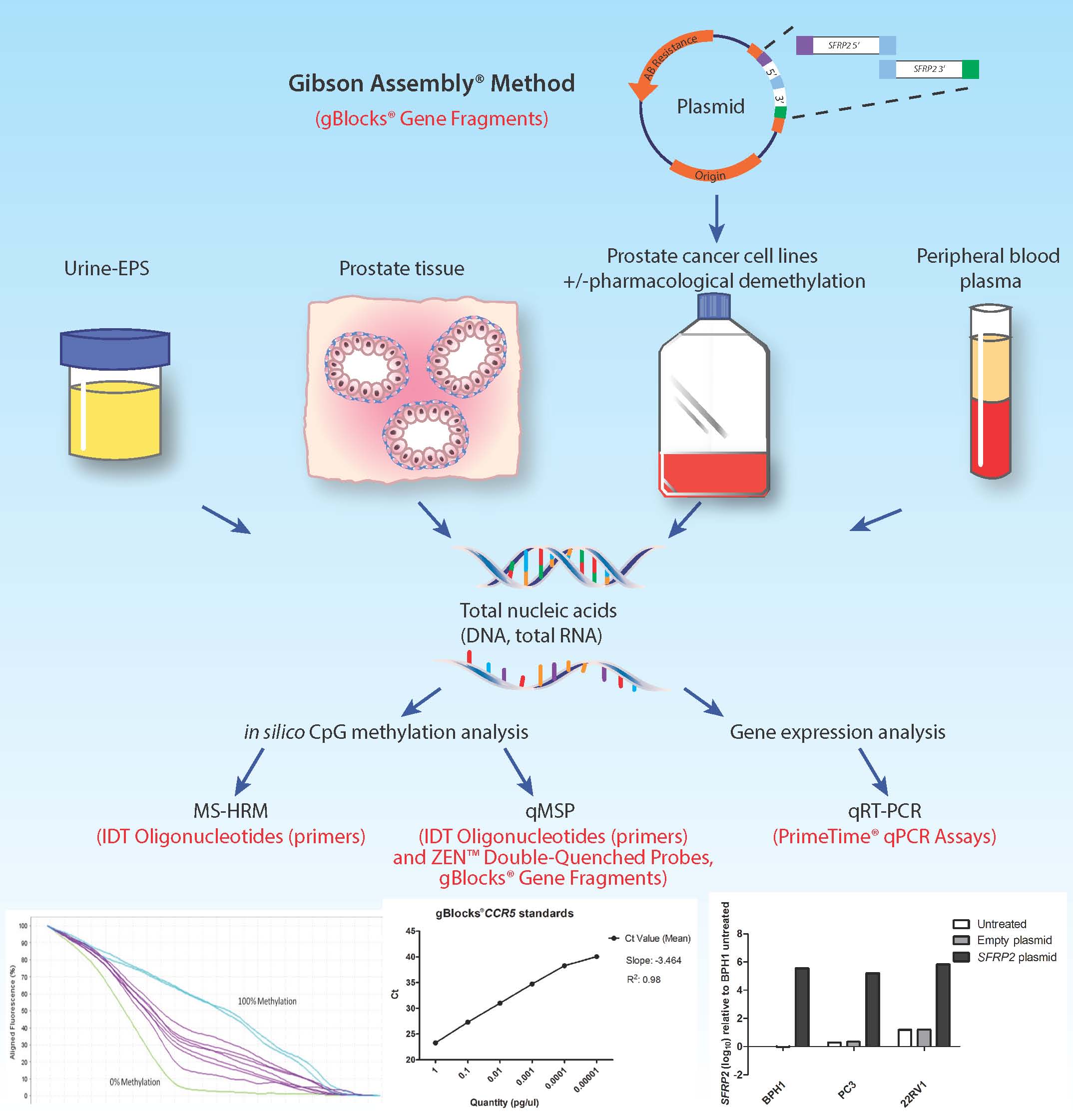 Previous published work by Dr Perry revealed that SFRP2, a Wnt signaling antagonist, is hypermethylated in approximately 65% of prostate tumors. Immunohistochemical analysis of prostate cancer tissue microarrays showed a strong inverse correlation between SFRP2 expression and tumor grade [6,7]. Researchers in the Prostate Molecular Oncology laboratory use IDT PrimeTime® qPCR Assays to measure expression levels of the SFRP2 assay id Hs.PT.56a.20705989 and genes (CCND1, MYC, and AXIN2) that are transcriptionally activated in response to nuclear β-catenin translocation in the canonical Wnt signaling pathway (Figure 2). Ongoing research by Dr Perry and her team is addressing the functional consequences of SFRP2 dysregulation in prostate cancer.

In a second line of research, the Prostate Molecular Oncology laboratory is developing prognostic molecular markers for use in a noninvasive test that will distinguish high-risk prostate cancer from insignificant tumors. They recover prostate cells from post-digital rectal examination urine samples (containing expressed prostatic secretions, or EPSs) by centrifugation. IDT primers and ZEN™ Double-Quenched Probes are then used for sensitive quantification of prostate cancer–specific DNA hypermethylation of a 6-gene panel in these cells.

In addition to the cellular component, the scientists monitor cell-free nucleic acids for DNA methylation and expression of small non-coding RNAs. The IDT PrimerQuest® Tool is used to design methylation-specific assays—primers and probes that will hybridize specifically to bisulfite modified, methylated target regions, but that will not amplify unconverted genomic DNA or unmethylated DNA. qMSP primers and probes differ from standard qPCR oligonucleotides because the template to which they are designed is not genomic DNA, but rather bisulfite converted, 100% methylated DNA. In addition, primers and probes are designed to capture a maximum number of non CpG-cytosines (to bias amplification of bisulfite converted DNA) and are designed with at least two CpG sites per oligonucleotide, preferably at the 3’ ends of sequence.

A panel of prostate cancer cell lines is also used to measure response to pharmacological demethylation. Using PrimeTime qPCR Assays, the researchers identify genes that are transcriptionally activated in response to DNA methyltransferase inhibition. This is important because it is a readily accessible method for identifying genes that are epigenetically regulated in prostate cancer.

Dr Antoinette Perry describes her introduction to IDT. “I was ordering tons of primers from a major European supplier for a DNA methylation screening project, and it was getting ridiculously expensive,” notes Perry. So she asked colleagues in a neighboring neuropsychiatric laboratory from where they were getting their primers. They gave her the IDT web address. Now IDT products play a role in several of the Perry laboratory projects (Figure 1).

The scientists used the PrimeTime qPCR Assay Library Selection Tool to choose the assays for all of these experiments. qPCR is performed on Applied Biosystems 7500 and 7900HT Fast Real-Time PCR Systems, and gene expression is calculated using the comparative CT method.

“We switched to IDT PrimeTime qPCR Assays from TaqMan® Assays (Life Technologies) because the PrimeTime qPCR Assays work really well. They are much more cost efficient, and I really like how we can get them in different sizes so that when we are testing gene target assays we can get just a small scale (Mini Assays), at a lower cost, to see if it would work for us. That was really appealing to us as a customer,” notes Dr Perry.

While the laboratory is currently using the assays in singleplex format, they plan to move to multiplex assays for some of their studies when they have better defined the performance of the assays and narrowed down the number of target genes to monitor.

The scientists in the Perry Lab were originally using MGB probes (Applied Biosystems) in their qPCR assays, but recently switched to IDT ZEN Double-Quenched Probes. “The ZEN Double-Quenched Probes are a really good fit for our methylation biomarker work for a number of reasons,” states Dr Perry. “Performing MS-HRM or any kind of bisulfite sequencing reaction results in sequences with reduced cytosine content, and thus lower Tm. Thus, in order to design probes with a 10°C higher melting temperature than primer sequences, the probes used in these experiments need to be longer.” ZEN Double-Quenched Probes can be up to 40 nt long and still remain quenched due to the shorter proximity of the ZEN quencher to the reporter dye. “This makes ZEN probes a great choice for these types of assays as the Tm of these longer probes can be kept high,” notes Perry.

ZEN Double-Quenched Probes also offer an advantage for qMSP assays. The longer probe length allows incorporation of a maximum number of CpG sites, thus enabling the researcher to interrogate the methylation status of multiple CpG sites at the same time

A previous DECODED article, Easily-Designed Standard Curves for qPCR [8], provided the incentive for using IDT gBlocks Gene Fragments as standards in their qPCR assays. The laboratory used gBlocks fragments to assemble constructs containing several different target genes that the researchers are interested in quantifying both for methylation and gene expression. They also created constructs with the full sequence of their targets, which they serially diluted to create standard curves.

gBlocks® Gene Fragments were also used in Gibson Assembly® reactions [9] to construct the cDNA of a Wnt signaling pathway gene. Additional gBlocks constructs were designed to represent different mutants with deletions in this same gene. These were cloned into plasmids and transfected into prostate cancer cell lines DU145 and 22Rv1 cells to investigate the effects of overexpressing these mutants in wild-type cells and to look at functional effects on the cells such as proliferation and apoptosis. Dr Perry confirmed, “The gBlocks Gene Fragments constructs worked! And we were very happy with this approach.”

Administering treatment only when needed

Prostate cancer is currently considered the most common non-cutaneous malignancy in men in the Western world. However clinicians are almost too good at detecting it, resulting in positive tests that often lead to radical treatment for even indolent forms of the disease. Research by the Perry laboratory will help meet a need to identify aggressive tumors at an early stage while they are potentially curable, and to distinguish them from indolent, low-grade tumors, which could be managed with proactive surveillance, thus avoiding overtreatment of clinically insignificant disease.

This is a process to convert unmethylated cytosine (C) residues in a DNA sequence into uracil (U), usually as a means for measuring levels of DNA methylation. DNA is treated with sodium bisulfite followed by an alkali. This deaminates unmethylated C residues and converts them to uracil (U) [1,2; Figure 3]; all 5-methylcytosine (5mC) residues present in the DNA are protected and continue to be maintained as C (C=U, 5-mC=C) [3]. The modified DNA can then be amplified with PCR primers designed to anneal with bisulfite-converted (altered) sequence. U (formed from unmethylated C) and thymine (T) nucleotides are amplified as T, whereas only 5-mC residues are amplified as C (Figure 4). Since bisulfite modification to distinguish between C and 5-mC in DNA was first described [2], many methods have been developed based on this chemistry. 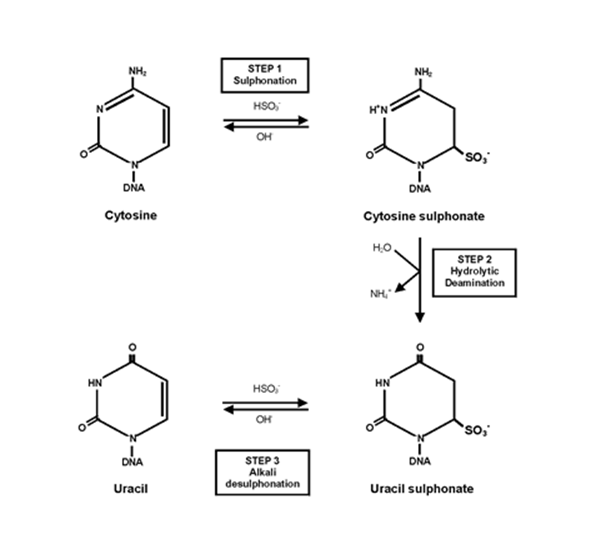 Figure 3. Bisulfite conversion of DNA. In the first step, bisulfite is added to the 5-6 double bond of cytosine. The resulting cytosine sulphonate undergoes hydrolytic deamination yielding uracil sulphonate in Step 2. In the third, final step, alkali treatment removes the bisulfite adduct, leaving uracil. Although 5-mC can also react with bisulfite, the reaction is extremely slow and the equilibrium favors 5-mC rather than the deaminated product thymine. (Figure courtesy of Dr Antoinette Perry, adapted from Shapiro et al, 1973 [4] and Clark et al, 1994 [5].) 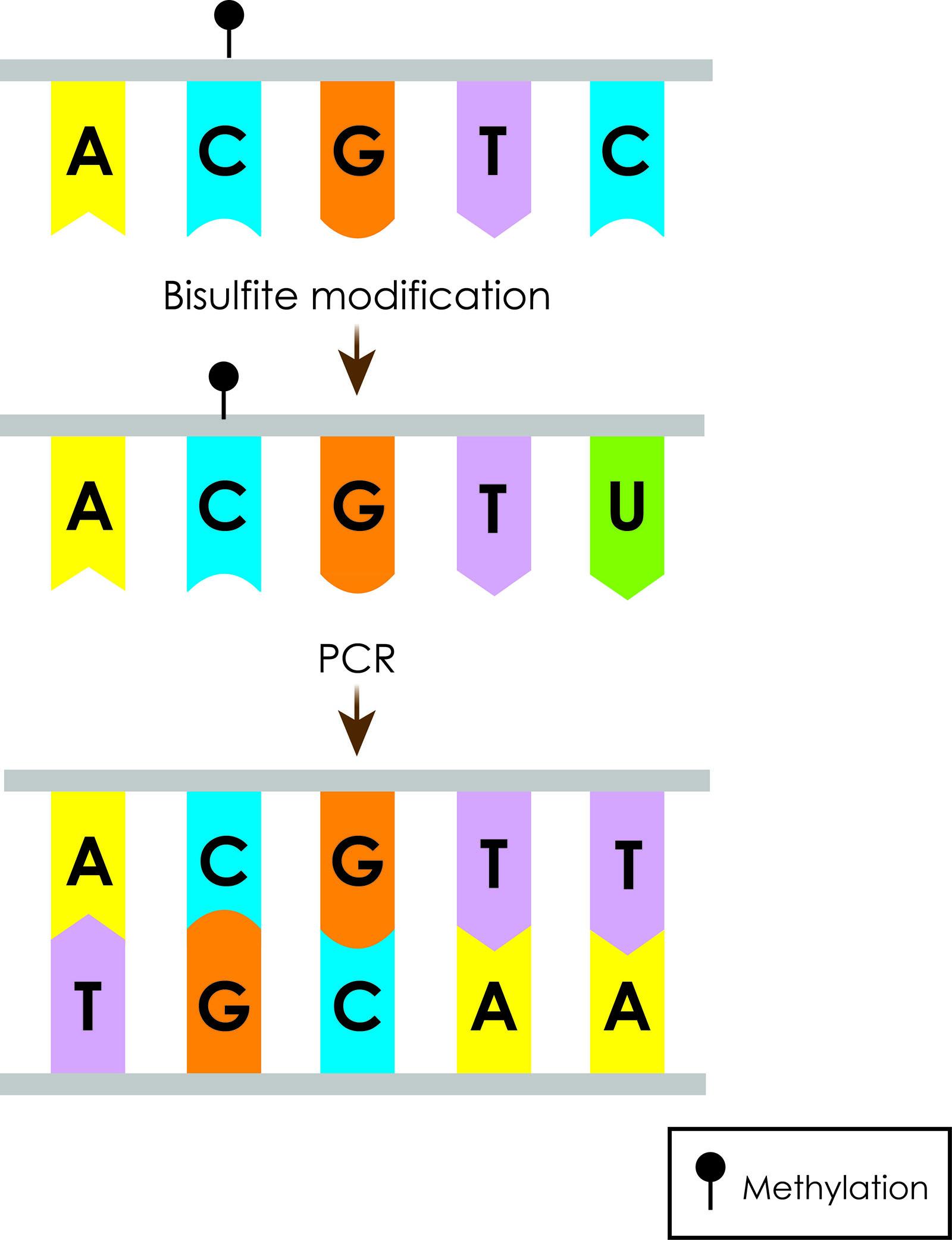 A PCR technique that discriminates DNA methylation status without use of methylation-sensitive restriction enzymes. The DNA sample is treated with sodium bisulfite, which converts all unmethylated cytosines (C) to uracil (U); 5-methylcytosine (5-mC) residues are unaffected. The modified DNA is subsequently amplified with primers specific for methylated versus unmethylated DNA (Figure 5). This is achieved by incorporating CpG dinucleotides into the primer binding sites so that primers will maximally differentiate between bisulfite modified, methylated or unmethylated DNA.

Gel electrophoresis is used to visualize amplification by one or other primer sets or indeed both sets (indicating methylation of one allele only). Quantitative MSP (qMSP) is a derivation of conventional MSP that utilizes a fluorescently labeled probe to quantify DNA methylation. CpG sites are also incorporated into the probe sequence to bias detection of hypermethylated template.

A specific stretch of methylated and unmethylated DNA will yield completely different sequences after bisulfite treatment, resulting in markedly different melting profiles of their amplified PCR products. Primers are designed to avoid any CpG dinucleotides in primer binding sites, enabling proportionate amplification of both methylated and unmethylated DNA. High resolution melt analysis of these parallel samples provides a closed-tube method of determining the methylation status of a DNA region of interest.

The following recommendations were provided by researchers in the Perry lab based on their experience with methylation studies to identify epigenetic markers for prostate cancer. See Perry et al (2013) [6] and Patterson et al (2011) [10] for additional discussion on primer and probe design for methylation analysis. 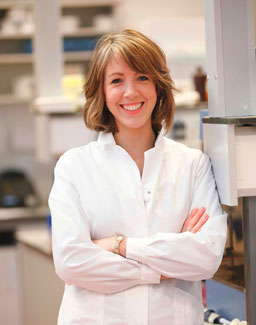 Dr Antoinette Perry is a Senior Research Fellow at the Institute of Molecular Medicine, Trinity College, Dublin, Ireland, where she received her BA and PhD degrees. Dr Perry has won several awards, including a 2012 Movember Research GAP1 Award and the 2011 Richard B. Handler – PCF Young Investigator Award, for her research on prostate cancer epigenetics.

Her undergraduate degree in human genetics got her interested in using genetics and molecular biology to understand human disease, and specifically cancer biology. Her PhD research provided an opportunity to study the role of epigenetics in cancer of the prostate.

Dr. Perry is pictured on the left, and she and her laboratory are on the right.

For analysis of human, mouse, and rat transcriptomes.