Research profile: Learn how 2015 iGEM Team Heidelberg students applied functional nucleic acids to design high-affinity, ligand-specific aptamers, in just hours, and without SELEX. Read how the team applied these molecules in western blots, to repair a mutated mRNA, and in a date rape drug test strip. Their DNA aptamer sequence designs were synthesized as single-stranded DNA oligonucleotides by IDT.

While the University of Heidelberg has a successful history at the annual iGEM (International Genetically Engineered Machine) competition, deciding on a project—one that used synthetic biology to provide positive contributions to society, and could be completed in a 3 month summer research period—proved difficult for this year’s young team members. In Heidelberg, the newly formed iGEM team usually spends the first few months of the year researching ideas for projects. While many such ideas were discussed by the 10-member team, none of the initial project ideas were a good fit for their diverse interdisciplinary abilities. But when they finally proposed to demonstrate the broad potential applications of functional nucleic acids, team members were enthusiastic and quickly committed to the project.

The Heidelberg team adapted functional nucleic acids such as ribozymes, DNAzymes, aptamers, and detection probes to improve on several existing basic research tools, as well as to solve some real world problems. They took advantage of IDT’s gift to iGEM teams of up to 20 kb of free gBlocks Gene Fragments, and also obtained DNA oligos and numerous base modifications. gBlocks fragments were used as templates to transcribe functional RNAs. Functional DNAs were obtained as single-stranded oligonucleotides, and modified bases were used in click chemistry reactions to visualize specific regions of a functional DNA molecule in an assay. Here is an overview of several of the team’s accomplishments.

Systematic Evolution of Ligands by EXponential Enrichment (SELEX) is the current method for selecting high-affinity, ligand-specific nucleic acids from a random library [1,2]. However, the SELEX process relies on careful planning and is time consuming, requiring multiple weeks for generation of useful aptamers and ribozymes. Furthermore, success is greatly dependent on the quality of the nucleic acid library employed in the process.

For their iGEM project, Team Heidelberg developed a novel, open-source software that generates similar high-affinity, ligand-specific nucleic acids for the detection of small molecules present in trace amounts. The algorithm they used is based on iteration of sampling and ranking sequences, and they named the software MAWS, for “Making Aptamers Without SELEX”.

Using MAWS, the students designed aptamers for several protein targets, including actin, p53, and Cas9, as well as the small molecule targets, kanamycin and ketamine. They also computed an aptamer for xylanase to support the current research of a member of Team Heidelberg 2014. At first, calculating each aptamer took several days. After tedious optimization, however, the team was able to reduce the calculation time to just a few hours.

The DNA aptamer sequence designs were ordered as single-stranded DNA oligonucleotides from IDT. Upon receipt, the team resuspended the oligos and heated them to ~90°C. The sequences were then slowly cooled, which allowed them to fold and acquire the necessary functional structure. The Heidelberg team tested these molecules using a chemiluminescence-based assay that the students developed. Through molecular dynamics simulations in silico, they demonstrated that the MAWS designed aptamers tightly bind their targets.

The team also designed fusion molecules that contained one to several aptamers combined with a “read out module”—in this case an HRP-mimicking DNAzyme. These “AptaBodies” (Figure 1) allowed the team to further validate their aptamers.

In what the team declares their most intriguing and possibly most widely applicable achievement, they used aptamers against protein targets in a modified western blot. Here, the AptaBody form replaced a conventional antibody to successfully detect novel target proteins. MAWS-generated AptaBodies drastically reduce the cost and time necessary for generating specific antibodies. They also make it possible to target proteins and other small molecules for which antibodies are not available, thus providing a tool that could be quite valuable in current research. 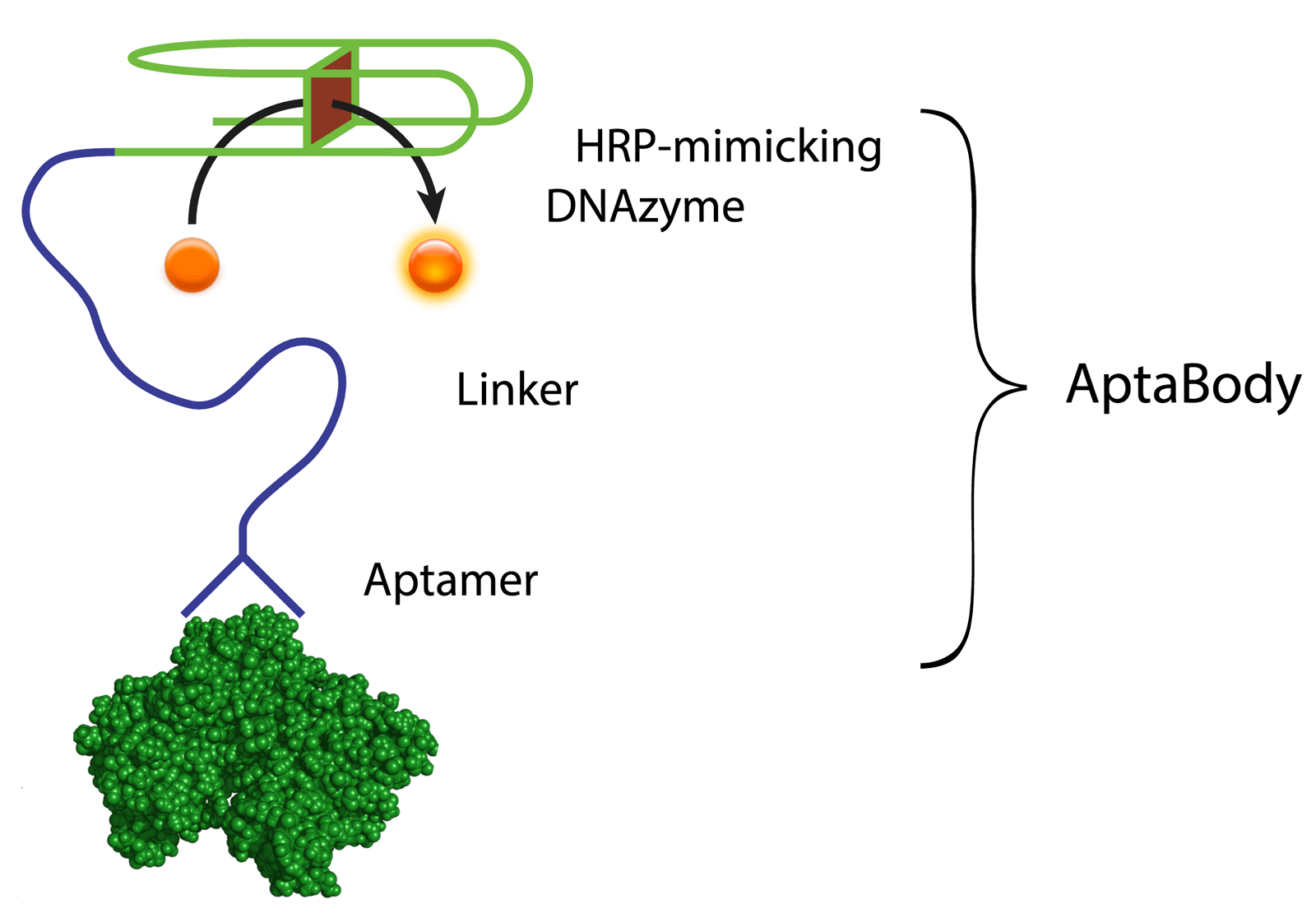 Figure 1. AptaBody design. AptaBodies consist of an aptamer, designed to bind a specific protein of interest, and a poly-A linker that couples the aptamer to an HRP-mimicking DNAzyme, forming a G-quadruplex.

The Heidelberg iGEM team also developed an additional software program, “JAWS” (Joining Aptamers Without SELEX), to design aptamers that could function as nucleic acid-based circuits. These molecules would be able to respond to external stimuli, with their catalytic activity activated by either the presence or absence of the cognate ligand. Such types of fusions are known as “Aptazymes” and can be applied as small molecule sensors (Figure 2).

As a proof of concept, Team Heidelberg developed a colorimetric aptazyme activated by the presence of ketamine. Ketamine is an anesthetic that induces sedation and memory loss, and while it has important medical applications, it is known to be frequently abused as a date rape drug. Thus, this assay could, in principle, be used as a quick test to detect date rape drugs on location.

People afflicted with cystic fibrosis possess mutations in the Cystic Fibrosis Transmembrane Conductance Regulator (CFTR) gene, which results in the thick build-up of mucus in the lungs. This compromises lung function and usually shortens the lives of those with the disease. The Heidelberg iGEM team wanted to use functional nucleic acids to reduce symptoms of this disease. Towards this goal, they designed ribozymes to repair the most common CFTR mutation—the deletion of phenylalanine 508—through mRNA editing.

The students redesigned a series of twin ribozymes, or “twinzymes”, to excise and replace the affected sequence within the CFTR mRNA. Their experimental design joins a twinzyme along with a repair oligonucleotide, into a ribozyme assembly vector containing a Hammerhead–twinzyme–HDV (Hepatitus Delta Virus) ribozyme cassette and various numbers of Hammerhead–repair oligonucleotide–HDV cassettes, all within what will be transcribed as a single RNA. Upon transcription, the twinzyme and repair oligonucleotides should be released from the RNA by the self-cleaving activity of the Hammerhead and HDV ribozymes, making them available to then repair the mutated CFTR mRNA. 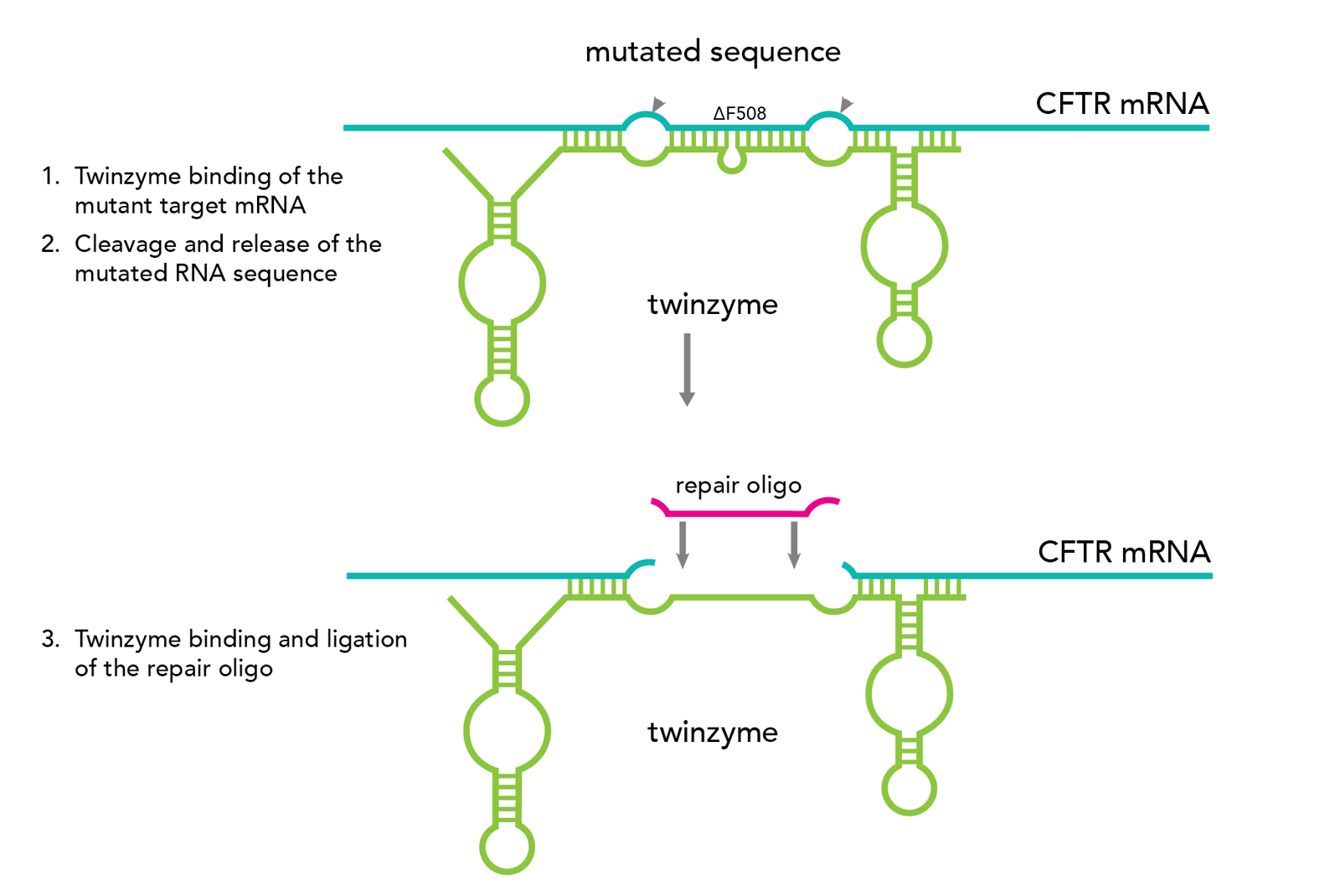 Figure 3. Twinzyme cleavage and replacement of mutated CFTR mRNA sequence. The reaction consists of 3 steps: 1) In the top panel, the twinzyme (green) recognizes and binds the mutated CFTR target mRNA sequence (blue); 2) The twinzyme then cleaves the target site at 2 locations (black arrow heads), releasing the mutated region of the mRNA; 3) Finally, as shown in the bottom panel, the twinzyme binds the repair oligonucleotide (red) that includes the missing bases encoding phenylalanine, and inserts it into the target mRNA.

The Heidelberg team used several methods to assay whether such a twinzyme design was able to both excise a targeted sequence and insert a repair oligonucleotide. They screened for twinzyme activity in yeast using fused fluorescent GFP/mCherry reporters, which, along with the ribozymes from yeast centromeric plasmids, were expressed under the control of a strong promoter. Activity was assessed by high-throughput flow cytometry. Their results suggested that the twinzyme design cleaves its targeted mRNA. Next generation RNA sequencing of samples from yeast co-expressing the fluorescent reporters and one of the constructs again indicated ribozyme cleavage activity, but showed no evidence of insertion reactions.

The precise excision of targeted mRNA sequences, demonstrated in vivo, is a notable accomplishment. Compared to existing viral and non-viral therapies currently used to treat cystic fibrosis, this ribozymal mRNA-editing approach could have significant benefits as a method of gene therapy. It is also potentially applicable in many other situations where mRNA repair could result in a functional protein. Like non-viral therapy, this method could avoid problems with immune system reaction by using liposome or nanoparticle delivery, as has been shown with siRNA [3,4]. In addition, RNA therapy, which can be applied transiently and without the need for viral-vectors, circumvents the risks still associated with DNA gene editing, such as lasting off-target effects and genetic instability. Thus, the team recommends pursuing this approach with further modified ribozyme constructs.

The team members we interviewed, Frieda Anna Sorgenfrei and Tim Treis, agreed that the best validation of the team’s achievements was winning the coveted iGEMers Prize, which is voted on by all 259 teams at the iGEM Jamboree (September 2015, Boston, MA, USA). The award is given to the team believed to be most deserving of the Grand Prize. While the iGEM judges ultimately voted them Second Runner Up to the Grand Prize, the Heidelberg team did win Best Foundational Advance and Best Poster, and was among the small set of teams nominated for Best Software Tool, Best Applied Design, and Best Wiki. Learn more about the Heidelberg Team’s project on their Wiki page.

DNA oligos of exceptional quality and length, available in tubes or plates.

Sequence-verified for use in CRISPR applications (HDR) and in vitro transcription.