Towards next generation biosensors

Research profile: Read how fluorescent protein-based Ca2+ indicators based on naturally occurring substrates are assembled using gBlocks Gene Fragments. These sensors are being developed to monitor in vivo neural activity.

Not far from the Midwestern Canadian farm where he grew up, Landon Zarowny is now developing the next generation of fluorescence-based biosensors. These biosensors produce fluorescent molecules from endogenous substrates, and can be used to image neurophysiological systems in live cells and tissues. While studying for his BS degree at the University of Alberta (Alberta, Canada), Zarowny was introduced to Dr Robert E Campbell, a professor at the University of Alberta and a world leading scientist in the development of fluorescent proteins and fluorescent protein technologies (see the Cambell group's work here). Intrigued by these projects, Zarowny joined Campbell’s laboratory for his PhD research.

One example of the laboratory’s work is the guided molecular evolution of improved versions of the genetically encoded calcium sensor, GCaMP, which can be used for studies in living organisms (Figure 1). Originally reported in 2001 by two research groups in Japan [3,4], this genetically encoded sensor was initially comprised of the M13 domain of a myosin light chain kinase, calmodulin, and a circularly permuted green fluorescent protein, GFP. In the absence of calcium, circularly permuted GFP exists in a poorly fluorescent state. Binding of Ca2+ to the calmodulin moiety results in a conformational change of the complex, producing bright fluorescence [5,6]. The first in vivo mammalian recordings using a GCaMP sensor were made in 2006 [7]. 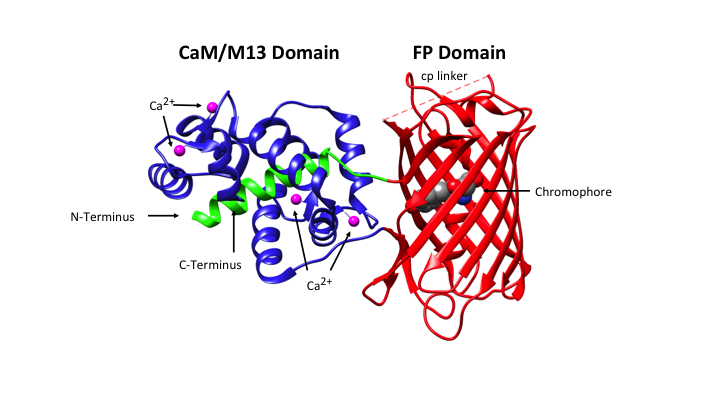 Figure 1. X-ray crystallography structure of a fluorescent protein-based indicator. An example of one of the genetically encoded calcium sensors (GCaMPs), used for visualizing intracellular signaling, developed in the Campbell laboratory: A fluorescent protein chimera that modulates its fluorescence in response to changes in calcium ion (Ca2+) concentration [1,2]. FP = fluorescent protein; cp linker = circularly permuted linker used to connect the original N- and C-termini of the (cp) FP; CaM = Calmodulin.

The Campbell laboratory has now extended the fluorescence range of GCaMP sensors. By developing a screening method to select improved and hue-shifted GCaMP-type indicators from large E. coli libraries, they were able to generate blue, improved green, and red optogenetic GCaMP reporters [1]. These variants can be multiplexed, and in some cases, can delineate intensity differences in Ca2+ levels, enabling Ca2+ imaging experiments that were previously impractical—for example, imaging of multiple Ca2+ indicators within single cells and improving sensitivity of neuronal activity imaging.

The Campbell lab often needs to build new biosensors. In the past that has required ordering expensive, new gene constructs or requesting them from other researchers, who then have to prepare and mail them, which takes time. The lab has found that it is a lot easier to just identify the needed sequence and then order it as several double-stranded DNA fragments (for example, IDT gBlocks Gene Fragments, which are available up to 2 kb in length). Several of these fragments can then be assembled using the Gibson Isothermal Assembly method, and if that turns out to be problematic, the researchers can still perform overlap PCR to assemble their new construct. “So using double-stranded DNA fragments essentially comes with its own backup plan,” affirms Zarowny.

Zarowny notes, “This approach is so much better than having to PCR everything, then build it, then sequence it. It avoids us having to obtain the molecular biology kits, prepare reagents, and screen several colonies. Then sometimes your PCRs don’t work properly, which costs time in troubleshooting the experiment. It’s been a huge savings to have gBlocks Gene Fragments when we are starting a project de novo.”

We have found it is a lot easier to just find the sequence we need, plug it into IDT software, get the gBlocks Gene Fragments, and assemble. With this approach we can construct the whole gene in about a week. – Landon Zarowny

The choice of DNA fragment supplier has been important to the lab. Originally using a different DNA fragment supplier, the lab would occasionally receive phone calls from the supplier 2 weeks after placing an order telling them that their sequence could not be made. This was despite software confirmation that the design was fine when they ordered the sequence. “It is critical that we know that the sequence we order is exactly what we are going to get, since we also order amplification primers at the same time,” comments Zarowny. And that 2 weeks of wasted time can be critical for the lab, which led them to switch to IDT as their DNA fragment supplier.

Novel biosensors that use endogenous porphyrins as substrates

Zarowny is currently working with an understudied enzyme, cobA, from the ubiquitous heme synthetic pathway. cobA is known to methylate a heme precursor and cause it to fluoresce [8]. First reported by Sattler, Roessner, and colleagues [9], this enzyme was overshadowed by the emerging fluorescent protein–based technologies.

By testing  several constructs, Zarowny plans to identify a calcium-sensitive variant of cobA. He will use this variant to link neural activity measured by fluctuating calcium concentrations to an increase in cobA fluorescence. By developing cobA to have calcium-dependent activity, the production of fluorescent molecules would then be representative of neural activity; that is, when parts of the brain are more active, they would exhibit more fluorescence.

Assembling 6 fragments at once

As part of his heme protein-based integrator project, Zarowny ordered 6 gBlocks Gene Fragments and assembled them into a vector in a single Gibson Assembly reaction, for a final construct of 2.4 kb. (GC-rich regions of the gene prevented him from synthesizing the vector from larger fragments.) He noted happily, “The first 2 colonies we picked and sequenced were perfect, with no errors.”

New tools and technologies lead to savings and results

Recently, the Campbell lab placed an order with IDT for a very large, complex construct that they wanted to test. Using traditional molecular biology, this might have taken months to assemble, but the lab was able to have it synthesized and sequenced by IDT in just a couple of weeks. The decision to order the sequence through IDT turned out to be a good one, because when the group used it in experiments, the construct did not work as intended. Thus, the lab saved many hours in the lab, in addition to money, that would otherwise have gone to waste.

By taking advantage of some of the most advanced molecular biology and protein engineer tools available, Landon Zarowny is directing his career towards developing new biosensors faster and more cost effectively than previous technologies have allowed.

Ordering your cloned sequences as synthetic gene products and save valuable time and resources.

Sequence-verified for use in CRISPR applications (HDR) and in vitro transcription.